Holistic, Alternative and Spiritual. This blog is dedicated to anything and everything to do with healing and spiritual development. If you have any articles or a video you would like to submit to this site then let me know and we may add it . This is a great way to promote yourself or just get your point of view out there. 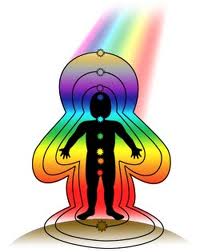 In part 1 we discussed how food affects our aura and health. It has been proved, by observation, that disease shows itself in the aura before making itself felt in the organs of the physical body; it can be seen as dark patches, or as mottled condition in the vari-colored radiation surrounding the individual, proving that some disorganization of the electrical field also takes place when disease is imminent. Evidences that medical science is gradually coming to realize the electrical nature of man,s constitution can be observed by the part that electrical therapy plays in the modern hospitals and specialists consulting rooms. As yet, the majority of doctors regard only the effects of electrical treatment as shown by the response of the physical organs; they work on the theory that certain electrical rays stimulate some bacteria and destroy others. To more please visit http://www.onlinehomestudies.com/blog/?p=3597

Reiki classes in San Diego Reiki is a natural healing modality and easy to learn. Healing Today has provided affordable classes to thousands of students since 1999. We will present Reiki classes on…Continue

The following foods have been shown to provide the best nutrients that will help you to get rid of unwanted toxins in the body.…Continue

What do you believe?

I thought I'd start a discussion with my latest blogpost,  please share what YOU believe!There are so many paths, with each of us walking…Continue

Hi Trish, thanks for inviting me to your group :)

Comment by Rev Dr. Deborah Lallier CHt CHTP on March 19, 2013 at 9:58am
Great way to stay connected and meet new people with similar interests. Thanks!

thanks for having me in this group :-)

Hi Everyone, looking forward to connecting in this group!

Thanks for the invite Ian, I look forward to learning more about all of you! :)

Hi Trish, thanks for the invite!

Just to let you know, I reckon the email id lifestudycourses@yahoo.com has been hacked as I received an email today asking for monetary help. Don't know if anyone else received it.

Thanks for the invite, Trish.  Hi to everyone in the group!

Hello all! Looking forward to being a part of the group!

You need to be a member of Holistic Healing group to add comments!